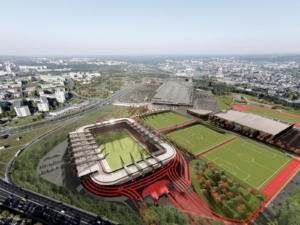 A 25-year concession agreement to create an 85 thousand sq. m. multifunctional sports complex in Vilnius, also known as National Stadium, was signed today. Ministry of Education, Science and Sports, and Vilnius City Municipality have signed an agreement with a company controlled by BaltCap Infrastructure Fund (BInF). The total value of the concession agreement is €280 million, while the estimated CAPEX is around €100 million.

The project will be implemented by BInF company Vilniaus daugiafunkcis kompleksas, using the design-build-finance-operate model and completed within three years after the financial closing. After commissioning, the concessionaire undertakes to operate the complex for the next 22 years.

Šarūnas Stepukonis, partner at BaltCap Infrastructure Fund, said the project has a remarkable social impact not encountered before in urban revitalization in Lithuania. „The project revitalizes a large, abandoned area in the heart of Vilnius. It creates a multifunctional community infrastructure that helps to generate a double-digit social and economic return for the city and country,” Stepukonis explained.

A 22ha of abandoned territory in the Šeškinė district of the capital city with old ruins of unfinished construction will be revitalized. A 15 thousand seat UEFA IV category stadium with a sports museum, a 3 thousand seat IAAF stadium, outdoor and indoor sports facilities, a kindergarten, and a culture and education centre for the local community will be built at the site.

The architects of the project are Cloud architects and Populous. The complex will be designed and constructed to be A++ energy efficiency class as well as BREEAM certified.

The €100 million BaltCap Infrastructure Fund has a length of 20 years, and it was established for investments in infrastructure development in Lithuania, Latvia, and Estonia. BInF has extensive experience in PPP projects in the Baltic region and Poland.