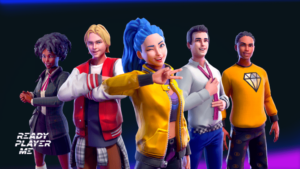 NordicNinja announced they participated as co-leads with Taavet Hinrikus and Sten Tamkivi in the Series A round of $13 million investment in Ready Player Me along with Konvoy Ventures and many more investors. The aim is to help the team scale globally, enable users and developers worldwide to express their boundless creativity, and create thriving communities online.

Ready Player Me (RPM) is an avatar engine used by 1,000+ developers. Users can create their unique avatar in a matter of seconds and use the same avatar across different platforms and apps across the metaverse.

The company’s software development toolkits (SDKs) allow developers to easily integrate the avatar engine into their apps with customization and interoperability across any platform, from Apple to Meta, from Unity to Microsoft and others, saving developers’ their time and effort to build their own avatar engine, allowing them to welcome millions of users immediately.

The team behind Ready Player Me has been at this since 2014, going through the idea maze long before the metaverse was anything but a sci-fi term coined by Neal Stephenson in “Snowcrash”. The team had to develop a toolkit to simplify their workflow, from building 3D scanners to designing custom avatars for enterprise customers This toolkit has evolved into a developer-focused platform, and as of late 2020, has been available for developers worldwide.

This year, Ready Player Me avatar platform adoption has grown from 25 to 1,000+ companies, making 2021 a breakout year for the company. An avatar platform for the metaverse that allows users to explore virtual worlds with one consistent identity is something that developers are welcoming – companies including VRChat, Somnium Space, Verizon, and Hiberworld have adopted Ready Player Me. The company has also partnered with popular brands such as the Warner Brothers, Dior, and New Balance. Most recently, Ready Player Me partnered with Deadmau5, Pixelynx, and artist Smearballs to bring the Head5 NFT collection to the platform.